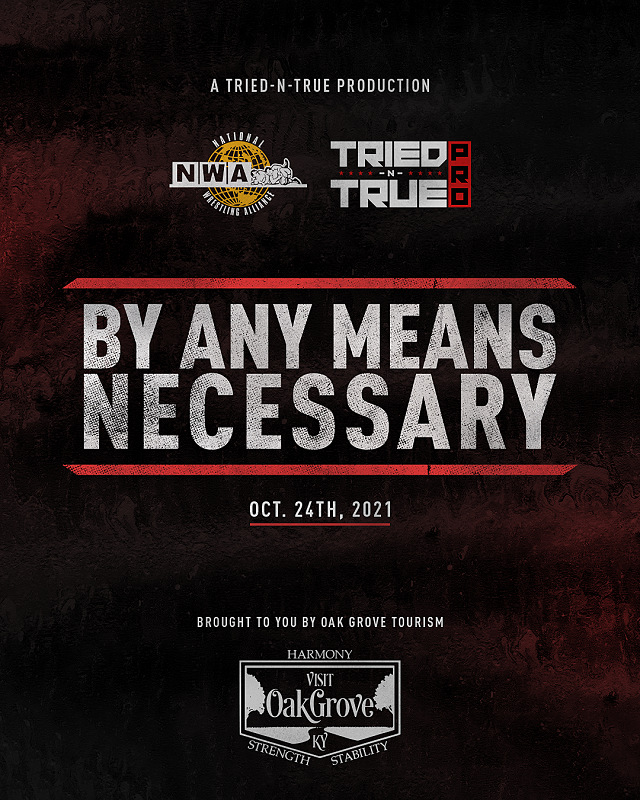 “BY ANY MEANS NECESSARY” A SUPERCARD TELEVISION EVENT

Due to the overwhelming response of the National Wrestling Alliance’s historic weekend of  NWA EMPOWERRR AND NWA 73, the NWA returns to live action in Oak Grove, Kentucky at the Valor Hall Event Center, October 24, 2021 with “NWA – By Any Means Necessary.” Bell time is at 6:00pm. VIP Front row seats are $40.00. All other remaining reserved seats are just $30.00.

Fans can expect a blistering night of wrestling action with the top stars of the NWA for a worldwide broadcast taping to air on Fite TV, including Clarksville, Tennessee’s own Crimson squaring off against his former War Kings partner Jax Dane in a steel cage match. This should settle their particularly violent and bitter feud.

Also scheduled to appear at ‘By Any Means Necessary’:

NWA’s “By Any Means Necessary” is co-produced by Tried N’ True Productions; the company is owned and operated by Clarksville, Tennessee’s own Anthony Mayweather. Anthony is known around the world to wrestling fans as NWA star “Crimson.” Mayweather is a United States Army veteran whose service included two tours in Iraq.

About the National Wrestling Alliance

Founded in 1948, the National Wrestling Alliance is the oldest and most prestigious professional wrestling organization in the world. Current programming includes the critically acclaimed all women’s pay-per-view EmPowerrr, NWA Powerrr, and the documentary series that started it all: Ten Pounds of Gold, plus a recent series, ‘Race To The Chase,’ which highlighted the NWA’s historic return of Wrestling at the Chase Park Plaza Hotel in St. Louis.